Academy Of Tone #71: the iconic guitar sounds and styles of John Mayer with guest Fabian Ratsak

On this week’s Academy Of Tone, Thomas is joined by Fabian Ratsak to take a long-awaited – and highly requested! – look at the guitar tones, playing style and general musical artistry of John Mayer.

One of the 21st century’s biggest guitar heroes, the multiple Grammy-winning Mayer is certainly a poster boy for tasteful guitar playing and restrained songwriting, as well as having a renowned eye for the latest and greatest gear. Indeed, when a certain vintage FX pedal is spotted on one of Mayer’s sizeable pedalboards, used prices generally rocket within hours.

During the show, Thomas and Fabian will dive headlong into Mayer’s highly influential California cleans, his tasteful tremolo technique and his Dumble-esque sounds, and explain those tones and playing styles – and why all guitarists seem to want them these days! We’ll also show you how to sound like Mayer using an AMP1 setup, of course.

John Mayer himself has something of an academic background in music. In 1997, he began studying at the legendary Berklee College of Music in Boston to improve his guitar chops – but he quit after two semesters to focus on his songwriting instead. And of course, 25 years and multiple chart-topping records (and all those Grammys!) later, we know that plan worked!

Mayer’s formative guitar years were spent on his 1996 Stevie Ray Vaughan Signature Fender Stratocaster, and it was with Strats that he became known as a ‘guitar hero’, receiving a number of different limited editions and one-off instruments from Fender. After playing Fender for years, though, came a shock move: Mayer left the Big F to sign with Paul Reed Smith and PRS Guitars, where a signature collaboration called the Silver Sky was unveiled. The Silver Sky is basically a 1963 Stratocaster with a PRS headstock, and Mayer has played one ever since his move away from Fender.

For his tones, Mayer has used a number of amps over the years, again with Fender being decisive in helping him define ‘his’ sound. He originally played Super Reverb and Bandmaster models, and later headed into more boutique amp territory, playing models by Two Rock and the fabled Dumble. Pedals-wise, Mayer is famed for his use of the Boss Blues Driver, the Ibanez Tube Screamer, and many more. We’ll discuss as many as we can during the show.

Mayer’s main playing influences include Stevie Ray Vaughan and Jimi Hendrix, with many of his tones being based on the ‘Californian clean’ Fender sound. Stay tuned for some really cool American guitar tones this episode, as Thomas and Fabian demonstrate these classic sounds and explain how to recreate them in the best way for yourself using classic or modern-day amps!

AMP1 MODS: Get them from your dealer or directly here at BluGuitar.com

Academy Of Tone #71: the iconic guitar sounds and styles of John Mayer with guest Fabian Ratsak 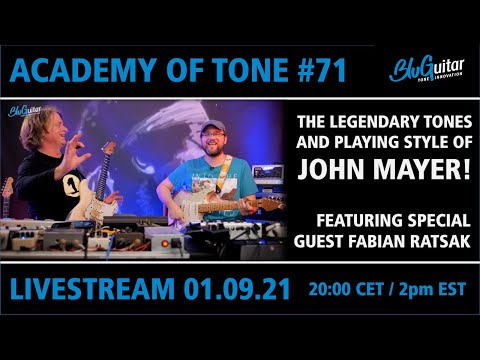 Academy Of Tone #71: the iconic guitar sounds and styles of John Mayer with special guest Fabian Ratsak! On this week’s Academy Of Tone, Thomas is joi...