admin
Indian trade Data from Indian news source print.in on below link so it’s accurate for data used in video for India .

The United States trade deficit has increased by a record amount, as data released by the Department of Commerce on Thursday showed.

This means Americans are buying more goods than they export from overseas, representing an outflow of money.

According to a news release from the Commerce Department’s Census Bureau and Bureau of Economic Analysis, the seasonally adjusted U.S. goods and services deficit was $75.7 billion in June, a 6.7 percent, or $4.8 billion, increase from the $71.0 billion deficit in May.

Pre-pandemic, the monthly trade deficit would be somewhere between $40 billion and $50 billion, as reported by The Wall Street Journal.

In recent months, as reported by the Wall Street Journal, American consumers and businesses have increased their spending and investments as the economy reverts to its size pre-pandemic. This has given rise to a demand for goods that cannot be satiated by local manufacturers alone.

The stimulus payments the government sent out to Americans since the early months of the pandemic have played a significant role in this. The payments have given American households more money to spend. With more disposable income, they seek to purchase more goods than what local producers can offer.

Exports and imports between India and China grew at over 65 per cent in the January-June period, trade data sourced from official agencies in both countries shows.

The surge came despite calls to boycott Chinese goods made after the 15 June Galwan clash at the Line of Actual Control in eastern Ladakh. Since then, the Modi government has also been trying to encourage local production and discourage imports through higher import duties.

China remains India’s largest import market and the second-largest export market after the US.

Its share in India’s total exports rose two percentage points to 7.3 per cent in 2020-21 from 5.3 per cent in 2019-20, shows data from the Indian commerce ministry, and the Chinese government’s trade data dissemination body.

Trade data for the current fiscal shows that this trend is continuing as India battles the second wave of the pandemic. 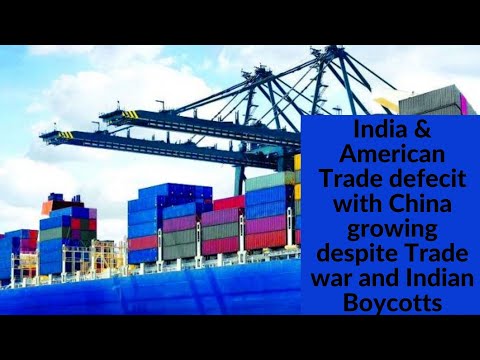 Indian trade Data from Indian news source print.in on below link so it’s accurate for data used in video for India . https://www.google.co.uk/amp/s/th...