• Rodrigo Bañuelos
Universidad Purdue, EUA
10:00am (GTM -5)
Conditional Expectation, Singular Integrals and Fourier Multipliers.
Resumen: In his 1983 research announcement "Some results in harmonic analysis in ℝn, for n → ∞" (Bulletin of the AMS), E.M. Stein announced new Lp estimates which do not depended on the dimension n for some classical operators in harmonic analysis. In this paper he also raised the following question and made a remarkably insightful statement:
"The results above raise the following question. Can one find an appropriate infinite-dimensional formulation of (that part of) harmonic analysis in ℝn, which displays in a natural way the above uniformity in n? A related question is to study the limit as n → ∞ of the above results, insofar as such limits may have a meaning. One might guess that a further understanding of these questions would involve, among other things, notions from probability theory: i.e. Brownian motion and possibly some variant of the central limit theorem."
This talk describes a general class of singular integrals and Fourier multipliers obtained from conditional expectations of transformations of stochastic integrals. From this, probabilistic techniques give norm bounds that are not only universal in terms of the geometry of the ambient space (including dimension) but in many important cases are sharp, or near sharp. To illustrate the techniques, we describe the solution of a 90+ year-old problem concerning the lp-norm of the discrete Hilbert transform and address similar problems for more general discrete Calderón-Zygmund operators. 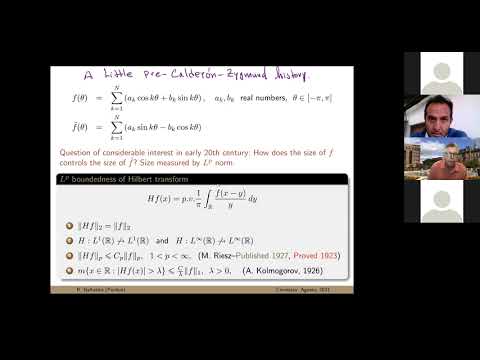