Questions or requests? Post your comments below, and I will respond within 24 hours.

We then express the total charge in that volume based on the assumption that n=number of electrons/unit volume (a non-trivial thing to compute, as we see in the followup example). So we calculate drift velocity formula v_d=I/(nAq_e).

Next, we work an example computing the drift velocity in a 12 gauge copper wire carrying 15A of current. We have to use the density of copper and the atomic mass of copper to compute the number of atoms per cubic meter, then we assume that 1 electron per atom is free to roam throughout the material because it is so loosely bound. This gives us the little n for copper (number of free electrons per cubic meter). Plugging into our drift velocity formula, we find that the average drift velocity of electrons in the copper wire is 0.331mm/s -- about a third of a mm/s!

How can such slow electrons deliver such a large current? There are just *so many of them* that they don't have to move very fast to deliver a large number of coulombs per second! 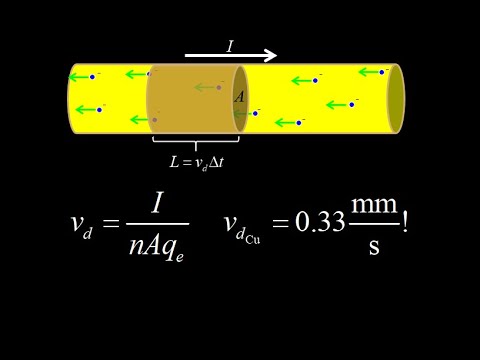