it's finally here! The do-it-yourself "Indirect" Evap Air Cooler! Indirect means that it adds NO HUMIDITY to your indoor air! just cool air. it actually outputs both dry air and humid air *but all the humid air stays outside! Indirect evap. units are basically a combination of a standard evap. unit (which is direct evap. cooling) and some sort of heat exchanger (which generates the cool-dry air "indirectly"). it's a sweet deal. lots of cool air just using water. each part of the system has it's own fan and water pump (2 fans and 2 pumps). both fans are 80 watts, both pumps 20 watts (note that about 250 to 300 watts worth of solar panels are needed (due to the amp requirements of the fans and pumps). how do they work?... these units work by taking advantage of the fact that evap. coolers are actually very strong water chillers as well. the water in the units reservoir is naturally chilled through the evap. process and stays at the same temperature as the cool air that it produces. to make it an "Indirect air cooler" you just add a heat exchanger to the set up. the heat exchanger taps into the cold water and produces the cool dry air from that. the only air that enters your house is the dry air. THE PERFORMANCE: the performance of the unit is outstanding. in dry and semi dry conditions the unit consistently produces cool air all day long. during the filming the unit was producing 60F air with an ambient air temp of 82.5F. (and held steady the entire time). as ambient air temps rose to near 85F the unit was producing 62F air. still super cool. and lots of air too! it's a smaller sized unit but has a large sized air-flow (both fans are 1500 CFM (max) and move air up to 20 MPH!). covers a large area. this unit will quickly cool down a whole room and more! another cool thing... the entire unit was being run with only the 12v solar panels shown in the video (two 100w ones and one 50 watt one). it's a 12V powered system so it runs on any 12v source (around 16 amps at full power) including 12v batteries if you like. it can also be run using AC power. (with the use of two 12v 10a or two 12v 15a AC to DC wall transformers). dozens can be found on amazon. THE SET UP: to set it up you just place the "cube" part of it outside any window and place the heat exchanger part inside the home. that's it! then you just add some water and turn it on. i show in the video show to run the pipes through any window with ease. make sure to check that part out. by the way there's no need for any type of venting in the structure that you are cooling. the heat exchanger (the part making the cool/dry air) can be used in a completely enclosed room. no venting is needed because the heat in the room is extracted or absorbed into the water via the heat exchanger and the resulting warm water is piped back out of the house where it's quickly re-chilled again. it's just a recurring constant loop *note that since the ambient air needs to be at least semi-dry (for the unit to work effectively) there's no need for an "air dehumidification" stage. in other words... the cool air that this thing generates essentially feels like compressor-based air conditioning. (in my area at 5-15% relative humidity it feels exactly like real AC). btw the unit will hold about 12 gallons and will run about 8 hours between fill-ups (in very dry air). even longer if the air is only semi-dry (because the water won't evaporate as fast). note that you'll have all that extra unused cool/moist air outside so that can be used for outdoor area cooling if desired (or point it towards the pipes or solar panels). that may help increase the efficiency of the system even further. pointing it towards the pipes makes it a type of two-stage indirect evap. cooler - but that is another story. *two stage evap. cooling is when you use the cool/humid air from the main unit to cool the heat exchanger or to cool a part of the heat exchanger ("the pipes" in this case). it's a sweet deal all the way around. not sure what else to say. if you like the video please share it, rate it, comment on it, subscribe to the channel and everything else 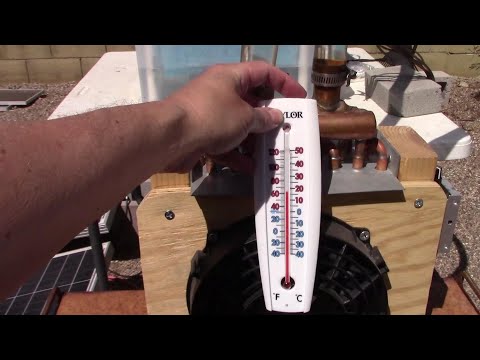 it's finally here! The do-it-yourself "Indirect" Evap Air Cooler! Indirect means that it adds NO HUMIDITY to your indoor air! just cool air....