Hey guys, here's a new compilation. This time it's not a morning coffee but an evening beer, which I sometimes have...or two....or tea when I don't want to drink.

Sorry in advance for the annoying slides that I do at the end of, well, everything lol. A weird habit I have lately when jamming stuff. But it's also something I'm incorporating a lot, so there's that. Also this time the whole video is a bit more experimental.

Time to explain. Instead of a random jamming this was a session I had after a kind of song-writing session. I think it was the first one since I moved here 6 months ago. That initial session yielded some cool ideas and I also developed some other stuff I was already working on. It was one of those sessions where everything seemed to be coming together in terms of what I want to write and what's interesting enough for me personally to further develop and discover. That's why it's also pretty weird or experimental. For me all of this makes total sense but I can imagine an "outsider" will have trouble getting those ideas. Doesn't help that they are not super clean here, as well as the tone I used. But the tone was also a reason for the creativity flowing.

My biggest influences the last years were soundtracks (both film and video games) and Tigran Hamasyan. Actually the whole vibe of Gustavo Santaolalla "The Last Of Us" soundtrack as well as the overall technical vibe and song structure of Tigran Hamasyans more up-tempo songs. That's basically what I'm doing....or still try to do. This whole compilation is more on the techy side, so less of that ambient and emotional side. (That I'm actually doing as well) For me it's all about one main idea and everything building around that and also playing around with that idea, either with the dynamics, the build up or the time signatures. Similiar how Tigran does it, though with less jazz on my side. So for anyone wondering what I'm trying to do musically, that's what it is. Sorry, it won't be a tech death album haha. And I'm not sure if it's even metal at some point. But still some sort of overly techy guitar music.

I almost have all the parts that I need to develop the song. The main part is the intro riff I'm playing here. That was the first riff/lick I had that grapped my attention. You can already see and hear all the dynamics I'm playing around with. They are not set in stone. It's not supposed to be hard palm mutes, or open notes. It's supposed to change depending on the mood (or build-up of the song) and overall feeling. Also every string has a different kind of palm mute going on. It's something I've been doing for a longer time now. If I play something on the low E, then the D and then the high string for example, then I often have different dynamics and mutings on all of them. In complicated parts like this I often do it either by rotating my palm slightly, to open or choke those notes, or I slightly lift my whole hand up to let a phrase sort of breath. (For me it's like a filter opening up, similiar to lines in electronic music) Palm muting with hybrid picking is probably the hardest thing here. Furthermore this whole phrase is a actually a septuplet lick (or riff). But other than that it's pretty straight-forward. You can just keep the pattern and go up and down across the fretboard.

And now to the tone, which sparked my creativity the most here. Let's start with the amp model. It's a Morgan AC20, which is based on a Vox AC30. These are my favourite amps for crunch to mid gain playing. I like to have one sound that can do everything by just altering your attack and dynamics. To enhance that I usually have a treble booster in the chain in some way. That allows me to get some nice spikey treble on hard pick attack. That's a combo I always use - treble booster + low to mid gain amp. And here I also added an octave divider which I wanted to try to make that E Standard feel lower. The only interesting thing is that I use parallel processing here. Helps getting a better and usable tone. Also using two drives in parallel is a cool thing to dial in a tone that's somehow lacking with just the amp or one drive pedal. 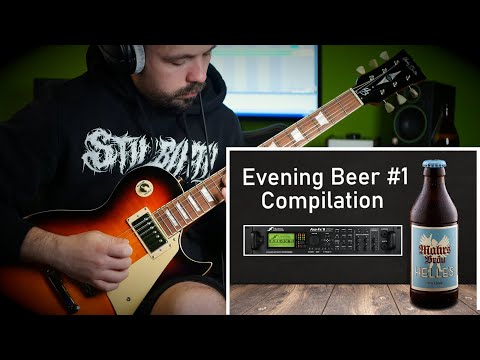 Hey guys, here's a new compilation. This time it's not a morning coffee but an evening beer, which I sometimes have...or two....or tea when I don't wa...