EVH 5150 III 50w Stealth Amplifier Inside & Out Review with Playing | What's this amp really like.

With the passing of EVH this amp is likely the last of an era. See this inside and out review as no one ever showed you before and hear the playing and tones of this great amp. A fully independent review too!

What you will learn:
Is this amp really any good?
What does this 5150 III cost?
Can it be used for any style?
What about quality inside?
What is it like to play?
Does it have a good warranty?

RubberDuck Tech YouTube Channel: https://www.youtube.com/channel/UC278ntV1eOfzBaanGGFpkfQ
Tell him I sent ya! and his video of the 5150 mod: https://youtu.be/7fw58fj-z8c

This is a 4K video quality review.

I ordered an EVH5150 III 50w Stealth amp back in early January to review, but it never arrived! I waited and waited and then EVH passed away :( but in July 2021 I decided to look again and that amp was available nowhere in the UK.

Then I found one!

I bought it immediately (from a smaller dealer and honestly could not believe I found one for sale). This review in its entirety is unsponsored in any way so I show you what I found inside and out of this amplifier. And there are two separate audio tracks played through it and some clean channel examples too just for fun.

Throughout the review I tended to think back to another recent amp I reviewed and had bought in the UK which was about 1/3 more expensive, and how poor that amp ultimately proved... but this 5150 III 50 watt stealth was so different - it ate that other thing for breakfast!

While I show you some of the things that others won't, I do also show just how great this amp really is and with no holds barred. And with Eddie's passing this tube amplifier is likely the last of a kind in my opinion and the newer 'latest' amp from EVH (the Iconic) somehow being what it is and where its made I doubt somehow that Eddie had too much to do with that... just an opinion of course.

I also show how to bias the amplifier on camera so making it easy to change out tubes or valves you might not like. You can calculate the bias voltages yourselves and I merely run through an example - probably biased a little low but that's OK. At least you can see how it's done.

Thanks to RubberDuck Tech for his wonderful tip re the input voltage mod for 240v countries - He's one of the good guys for sure so do hop over there and sub him! He deserves that at least.

I have spent considerable time creating this video entirely as I said and at my own expense:

PLEASE SUBSCRIBE, RING THE BELL, AND THUMBS UP to give my channel a boost and thank you for watching - I hope the video is enjoyable.

EVH 5150 III 50w Stealth Amplifier Inside & Out Review with Playing | What's this amp really like. 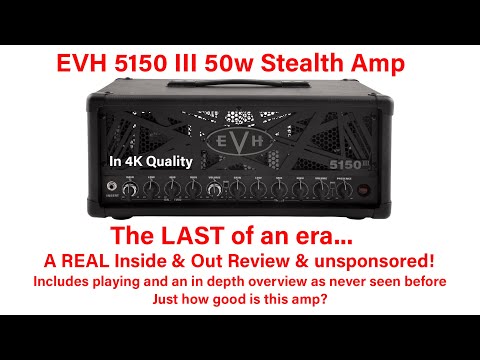 With the passing of EVH this amp is likely the last of an era. See this inside and out review as no one ever showed you before and hear the playing an...