A very cool amplifier for you today to formally kick off 2022! This is the Hylight Custom SD VR204....the SD standing for 'Shiny Diamond'. Why? Well, the basic concept of this amp is that it's a vintage-spec Hiwatt DR504 circuit scaled down to 20W - and with a certain Mr D. Gilmour being a notable user of those old amps, including on 'Shine On...' it's no surprise that this amp is shooting after that tone.

Hylight is an interesting company with two very distinct - and very separate - halves to its history. Back in the mid-60s, Hylight was the parent company that manufactured the classic Dave Reeves-designed Hiwatts that became so revered...the DR103 and DR504 were both originally made by Hylight. But then in the early 1980s, Dave sadly passed away, and after a bit of toing and froing between solicitors and his estate - complicated by the fact he wasn't married - Hiwatt as a brand continued on, but manufactured by a different parent company (Biacrown Ltd) and the Hylight name became defunct.

The name sat unused until the registration/trademark expired in 2018 - at which point, the second half of Hylight's history began. The name was bought by Andrei Nicula (who also built my lefty Partscaster Strat...as a slight aside!) who began to manufacture amplifiers under the Hylight brand...inspired by those old classic Dave Reeves circuits, but with some modern day tweaks to make them more usable for players in 2022, such as an FX loop and line out.

Vintage Hiwatt amps were famously built to beyond-military standards, and Hylights continue in that tradition...they're all handwired in London using premium-quality components, such as UK-made transformers and F&T German-made capacitors. There's versions of the DR103 (the VR103) and DR504 (the VR504) in their range, but this scaled down version of the latter uses two EL84s to deliver that legendary tone at a more modest - and ear-friendly - 20 watts.

Today, I'll be putting it through its paces with a selection of different guitars, and cranking the amp up to maximum volume to really get those premium quality components working. But towards the end, I'll also throw a few Gilmour-inspired pedals into the mix to see how much it enjoys being boosted into the front end. I'll also be running it into two top quality UK-made Fane speakers - the brand most synonymous with Hiwatt - to really let it shine.

What do you think? Epic Hiwatt Tones? Or not for you? Comment below! 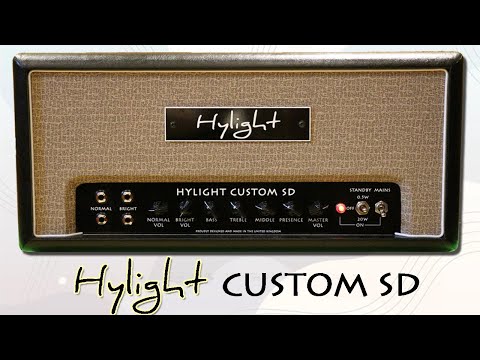