Abstract: Massive random access plays an important role in the context of Internet-of-Things (IoT) and machine-type-communications (MTC). In massive random access, a cellular base station (BS) needs to connect to many sporadically active devices. Sparse recovery algorithms are effective for detecting user activity and channel estimation in massive random access. The joint activity detection and channel estimation problem at a multi-antenna BS can be formulated as a joint sparse recovery problem or a multiple-measurement-vector (MMV) sparse recovery problem. Over the past decade, several algorithms have been developed for joint sparse recovery. These model-based algorithms can be broadly seen to be variants of Iterative Soft Thresholding Algorithm (ISTA), Approximate Message Passing (AMP), and the Alternating Direction Method of Multipliers (ADMM) method.

Sparse recovery algorithms that can learn from data while taking advantage of model-based signal processing have been recently developed based on deep unfolding, algorithm unrolling, or, more generally, model-based deep learning. We propose one such learning-based joint sparse recovery method for the multiple measurement vector (MMV) problem using deep unfolding. We unfold an iterative alternating direction method of multipliers (ADM) algorithm for MMV joint sparse recovery algorithm into a trainable deep network. This ADM algorithm is first obtained by modifying the squared error penalty function of an existing ADM algorithm to a back-projected squared error penalty function. Numerical results show that the proposed methods can reduce the preamble requirement significantly.

Bio: Srikrishna Bhashyam received the B.Tech. degree in electronics and communication engineering from IIT Madras, India, in 1996, and the M.S. and Ph.D. degrees in electrical and computer engineering from Rice University, Houston, TX, USA, in 1998 and 2001, respectively. He was a Senior Engineer with Qualcomm, Inc., Campbell, CA, USA, from 2001 to 2003, where he was involved in wideband code division multiple access modem design. Since 2003, he has been with IIT Madras. He is currently a Professor with the Department of Electrical Engineering. His research interests include communication and information theory, statistical signal processing, and wireless networks. He served as an Editor for the IEEE Transactions on Wireless Communications from 2009 to 2014. He has been an Editor of the IEEE Transactions on Communications since 2017. 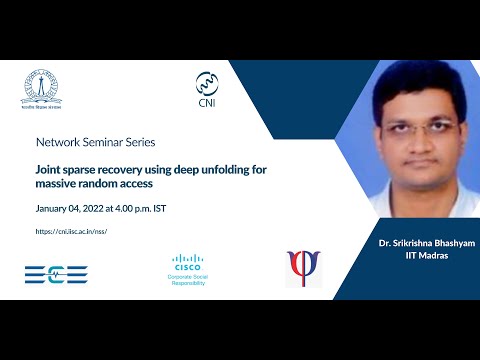