Hello and greetings from Munich! Today we’re taking you on a mouthwatering German food tour across the Bavarian capital. If you’ve been watching this channel for a while, you may already know that Sam and I love experiencing a new destination through its food, and Munich was no different! Over the course of our visit, we set out to sample as many German dishes as possible.

In this video, we’ll be trying German roast pork knuckle with potato dumplings, Oktoberfest chicken coated in pretzel crumbs, goulash with bread dumplings, a snacking board featuring all sorts of cheeses and sausages, and for a little something sweet, we’ll get a taste of the Emperor's Mess pancakes. And of course, because this is Munich, it wouldn’t be a proper food tour without a beer…or three. So grab a snack and join us as we eat our way across Munich. It’s going to be a tasty one!

Where to eat & what to eat in Munich:

And that concludes our German food tour in Munich. We had a great time eating our way across the city and sampling so many new-to-us dishes. Of course, there was only so much we could eat over the course of a few days, so let us know what German and Bavarian dishes we missed that fellow travellers should sample during their visit. If you enjoyed this video, don’t forget to subscribe and see you soon with more videos from Bavaria! Thanks for watching! 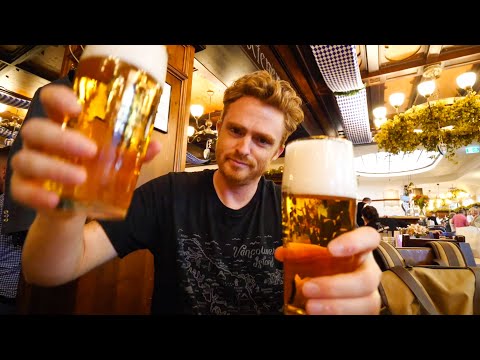 Hello and greetings from Munich! Today we’re taking you on a mouthwatering German food tour across the Bavarian capital. If you’ve been watching this ...