Well, the time has officially come. Considering the popularity of I-Dog has risen greatly within the past few weeks, I think now would be a very appropriate time for a collection update AND an epic idog dance party light show. I have exactly 70 I-Dogs excluding the iZ, only two of white are duplicates (plain white amp’d & cotton Candy 2007).
iZ and the Room Tech Beingz aren't really marketed as I-Dogs but I thought they were close enough to them to throw in the video. Mijam Wassup is marketed as I-Spin in Japan which is why that's included as well.
I started collecting in around 2008/2009, what really interested me in idogs was their stunning modern look, how many variations and colors they had, how their lights looked, how they moved, their songs, and how their pitches varied so often. My first I-Dog ever was my blue flowers I-Dog Amp'd and my latest I-Dog ever was my second cotton candy 2007 I-Dog.
This was a ton of fun to make, and took a lot of time wiring up all the speakers I needed to plug in haha, but in the end it was all worth it. You ever wondered what 70 I-Dogs in the dark looks like? Well wonder no more. Really hope y'all enjoy this!

Here is a playlist of each of my I-Dogs In action individually:
https://www.youtube.com/playlist?list=PL0FicJI0yYmiiHnewl5cbMff57hTD0UzH 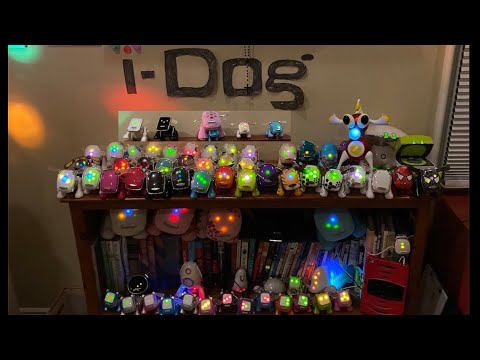 Well, the time has officially come. Considering the popularity of I-Dog has risen greatly within the past few weeks, I think now would be a very appro...