Selenium rectifiers - the smelliest components ever

admin
You'll still find lots of these in old equipment. Sometimes you'll smell them too, and if one blows up while you're working in the panel the vile smell will make you leave the area fast.

This is a selenium rectifier. It was popular from around the 1930's until the much better silicon diode took over. It consists of a metal plate with a coating of doped selenium and a tin-cadmium electrode. When heated the tin-cadmium diffuses into the surface of the selenium and creates a semiconductor junction with a forward voltage of around 1V under load, and a PIV (Peak Inverse Voltage) of around 20V.

The low reverse voltage means that for higher voltages the diode plates have to be stacked, and each one adds another forward voltage drop to the stack. This makes the selenium rectifiers much less efficient than modern silicone diodes.

You'll find these in various industrial machines like elevator controllers, bowling pinsetters and various old (but rugged) factory machines. If you're lucky they will still be working, but if you're unlucky the rectifier will have failed with a pungent smell. If you're even more unlucky the rectifier will fail next to you with a loud electrical parp and a jet of extremely stinky smoke that will force you to leave the area.
It's claimed that the smoke is harmful to breathe, but to be honest you're not going to stay around anyway, as the smell is sometimes described as rotten eggs. I'd say it's that plus a sickly sweet smell too.

The modern replacement is the humble 35A block rectifier, which will fit most applications and is easy to mount. It has the advantage of having spade terminals so all you need to do is work out which wires are from the transformer, cut and crimp them, and put them on the AC terminals of the rectifier. Then trace the wires going to the smoothing capacitor and do the same, making sure the positive and negative go to the correct terminals of the rectifier. Changing the capacitor may be a good idea too.

Note that for higher voltage applications the new rectifier will have a lower voltage drop resulting in a higher DC voltage. Although unlikely to be an issue, it may push some older components over the edge. In some instances you may be able to compensate with a slightly lower voltage secondary transformer tap, or a slightly higher voltage primary tap which will result in lower secondary voltage.

If you enjoy these videos you can help support the channel with a dollar for coffee, cookies and random gadgets for disassembly at:-
http://www.bigclive.com/coffee.htm
This also keeps the channel independent of YouTube's advertising algorithms allowing it to be a bit more dangerous and naughty.

Selenium rectifiers - the smelliest components ever 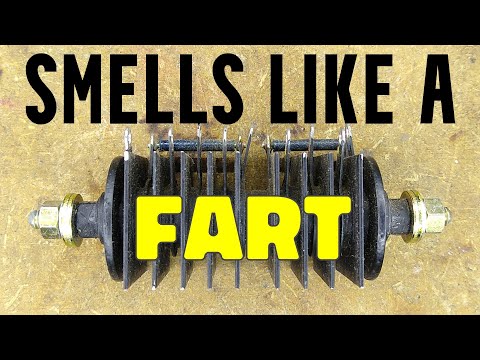 You'll still find lots of these in old equipment. Sometimes you'll smell them too, and if one blows up while you're working in the panel the vile smel...