One of the greatest Beatles rockers! John and George play quintessential early 60s rock and roll rhythm and lead parts, each taking a guitar solo on “Long Tall Sally”.

There is some confusion on the internet as to who played what part on “Long Tall Sally”. Part of this confusion comes from the strange fact that the guitar parts switch stereo channels after the first guitar solo at 0:50. This results in both guitar solos sounding like they came from the left channel (which was perhaps the intention of this maneuver), leading some to believe that George played both guitar solos. However, in all live performances that feature both solos, it is clear that John played the first and George played the second. Another surprising fact from the live performances is that John was the one who played the bends during the first vocal-instrument call and response parts of each verse. For clarity in this cover, I kept John’s part panned slightly left and George’s slightly right throughout the whole song.

Both John and George play Chuck Berry-esque shuffle guitar grooves throughout the song. However, there are some nuances that I will highlight here. One of the biggest is that John played the standard 5-6-7-6 shuffle pattern (0:09), while George played a variation higher up on the neck with the pattern 7-6-5 (0:23). The numbers here represent the interval of the moving rhythm line to the root, so relative to a G note, 5 would represent a D, 6 an E, and 7 an F. These contrasting patterns create a unique groove within the guitar parts of “Long Tall Sally”.

There are occasions where John and George break their respective patterns. At 0:10, John goes immediately from 7 to 5. At 0:14, George plays a standard rock-shuffle groove between the 5 and 6. At 0:24, John makes a faster transition from the 7 to the 6. Variations such as these can be heard throughout the song, and I believe to have faithfully recreated them in my performance.

John’s first solo begins with a blazing G7 chord. Notice how the triplets at 0:33 and 0:35 add to the excitement! The D note at 0:40 is an interesting way to end John’s walk up the pentatonic scale. On the way back down (0:41), John blends the major and minor G pentatonic scales while adding some subtle double stops.

George begins the third verse with a 3 note double stop walkup from F to G (0:50). This is in contrast to the 4 power chord walkup from E to G in the second verse (0:18). His solo (1:04) begins with some raunchy single note bends that are slightly out of tune. George plays a sleek chromatic octave walkup line to transition from G to C, hitting a slight pinch harmonic on the second high G note in the first phrase. John builds the excitement by emphasising George’s phrase through 7th chord smacks. This chromatic section is a cool break from the otherwise standard 12 bar blues progression that defines the rest of the song. At 1:16, George plays a muted rake before a fast pentatonic run.

The final shout section of “Long Tall Sally” is accentuated by George’s chord smacks. Notice how his rhythmic pattern for the first few bars (1:23) is different from what he would play in later bars (1:32). At 1:34, he plays a D note before each hit of a D7 chord, and similarly at C note before each C7 chord at 1:36. One interesting note is that John and George stay on a G chord at 1:39 while George Martin’s piano and Paul’s bass hammer out a D chord/note. George introduces further variation for the second shout chorus, now alternating between G and F chords and then C and Bb chords.

“Long Tall Sally” concludes with simultaneous lead guitar lines from John and George (1:54). John plays a flashing rock line, ending with 3 fast strums of a G7 chord that come in slightly earlier than the rest of the band’s final hit. George plays a low chromatic line, finishing with a G9 chord at the same time as Ringo and Paul. 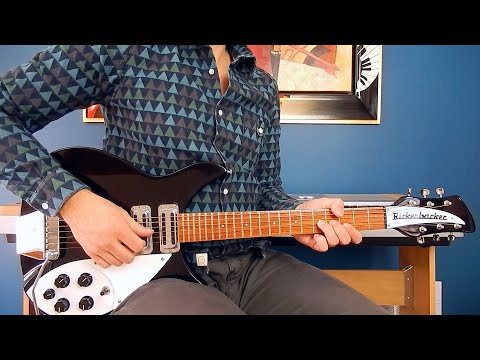 One of the greatest Beatles rockers! John and George play quintessential early 60s rock and roll rhythm and lead parts, each taking a guitar solo on “...