Zeb Ejiro, OON and Ogugua Ajayi in 10mins with DrCI

10mins with DrCI brings a literary amalgamation. The story of Nollywood, the screen, the Production and the harvesting of ideas that speaks through the soul, body and spirit. Just like music, the film industry has empowered many, has made many famous and rich. Learn the secret from the talebearer and award-winning Producer and writers. You can’t afford to miss watching this great informative live session loaded with Local and international collaboration. Join us.
Know the Guests for the Saturday May 1st in 10mins with DrCI

Award-winning, Zeb Ejiro, OON is one of the builders of Nollywood. He is a creative writer, film producer/director and an activist. He is the founder of Association of Movie Producers (AMP). A founding member of Directors Guild of Nigeria (DGN). A founding member of Actors Guild of Nigeria, Former president of Association of Movie Producers. Presently The Vice Chairman board of trustees Association of Movie Producers Member board of Trustees Directors Guild of Nigeria. Member, study group for Nigeria and South Africa Co-production initiative. A member of the governing board Musical copyright society of Nigeria (mcsn) affiliated to SESAC. Member, Africa Children Broadcasting Network (An NGO affiliated to UNICEF) The Founder/Vice Chair of The Film and Broadcast Academy, Ozoro, Delta State. The Executive Chairman/CEO Nollywood Business Frontiers (nbf) Chairman Artistes united Against Rape (auar) an NGO. He has produced and directed numerous movies. He has won many awards including a National award as Officer of the order of the Niger (OON) in 2005. ZEB EJIRO FILM Academy www.facebook.com/ZebEjiro.FilmAcademy/
+234 803 328 6755
Award-winning Ogugua Patricia Ajayi is a wife, mother, writer and a drama producer. She did her Primary and Secondary Education in Lagos and went further to study Law at the University of Ibadan, practiced Law for one year and then decided to pursue one of her dreams, which is in Early Childhood Education. She has written some children books like "Pet The Cat" as well as some Novels one of which is "Blessings in the Dark". She equally produced her first audio skit "The Breakup".... She really loves how stories can be used to teach life lessons and communicate truths. She also knows the power of a good story, the power to captivate, entertain and as well educate greatly. https://ogugua-ajayi.com/ Download free ebook “TRAPPED” https://cutt.ly/VcwcATP www.facebook.com/OAauthor

Zeb Ejiro, OON and Ogugua Ajayi in 10mins with DrCI 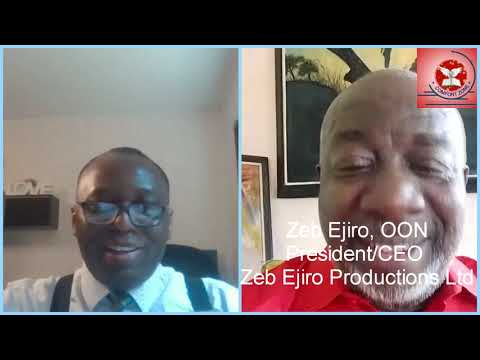 10mins with DrCI brings a literary amalgamation. The story of Nollywood, the screen, the Production and the harvesting of ideas that speaks through th...